Last month on the 18th of August, AUN/SEED-Net held the 2nd Focus Group Meeting for the Transitional Project. The meeting was conducted online through virtual meeting via Zoom. “The Overview of AUN/SEED-Net Transitional Project” was the main idea of the second meeting to help determine the direction of AUN/SEED-Net. Vice Presidents or Focal Persons responsible for academic affairs and Deans of Faculty of Engineering of AUN Member Universities attended the meeting. Following the initial discussion with AUN, AUN/SEED-Net was suggested to co-organize the Focus Group Meeting with AUN universities to collect opinions regarding the direction of AUN/SEED-Net after March 2023. The meetings proceeded in two phases: the first, which took place back in November 2021, was the discussion on implementation programs. The second meeting, on 18 August, was to inform the concrete transitional plan after reaching a consensus among concerned parties. 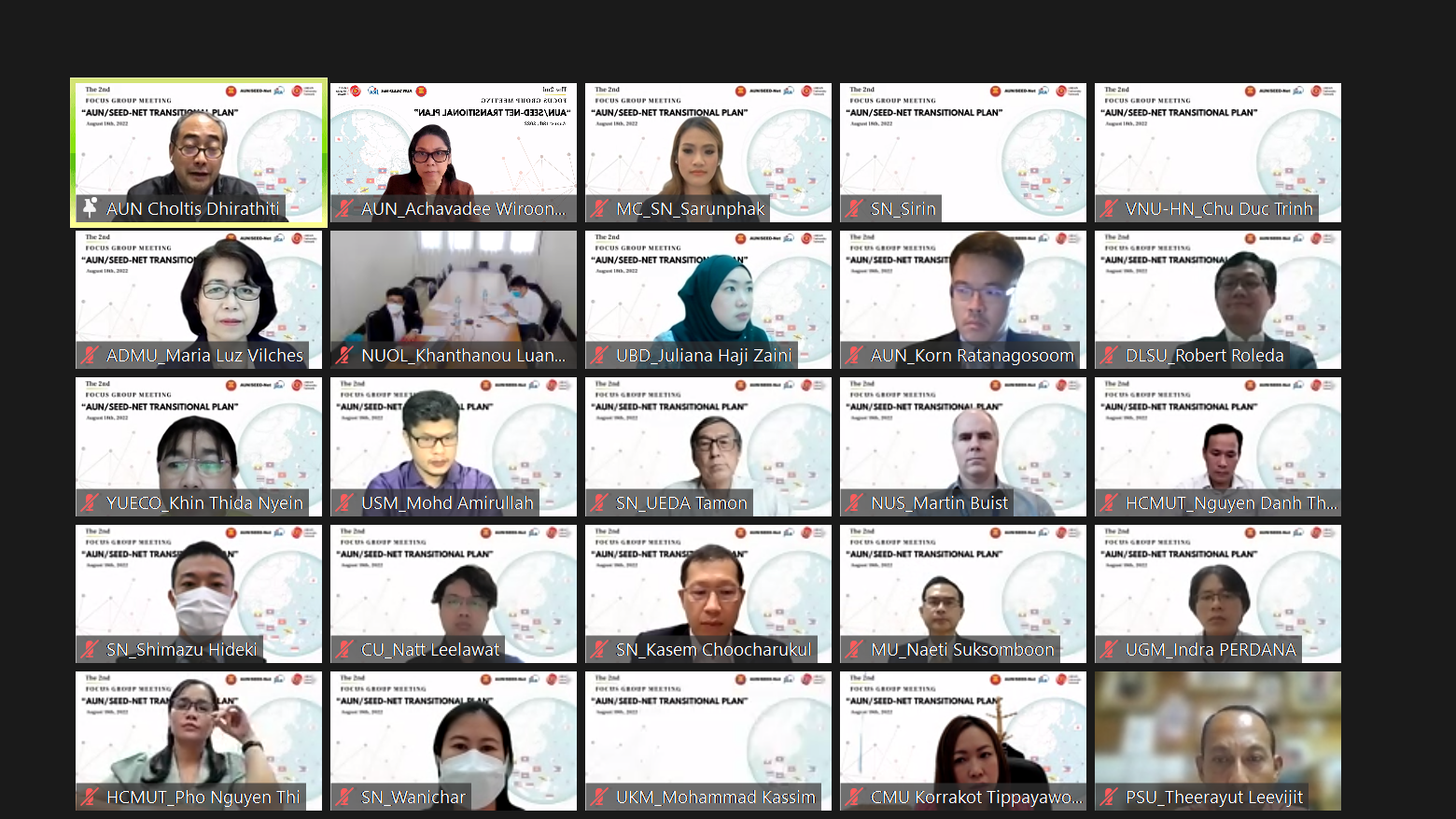 The objective of the 2nd Focus Group Meeting was to collect opinions from AUN member universities regarding the programs that will be implemented during years of the transitional period throughout 2023 to 2026. Currently, the project is in the period of Phase IV, which began since 2018 and will take place until 2023 with important goals such as the completion of the Japan International Cooperation Agency (JICA) project in 2023. Having established and cultivated the network for over a decade; Phase 4 aims to expand and sustain achievements of AUN/SEED-Net.

In the on-going process of Phase 4, there are 7 active programs and achievements, all of which respond to the objectives of this 5 year period, namely:
1. Collaborative Education Program (CEP)
2. Alumni Support Program (ASP)
3. Regional Conference (RC)
4. Special Program for Research against COVID-19 (SPRAC)
5. ASEAN Engineering Journal (AEJ)
6. Special Fund for Purchase of Scientific Literature
7. Video Contest for Alumni Network (V-CAN)

AUN Member Universities acknowledged the possible implementation programs in the transitional period of AUN/SEED-Net. To maximize the benefits of AUN/SEED-Net’s network and achievements, future programs after Phase IV and during the transitional period should be discussed thoroughly with AUN Universities. After the completion of Phase 4, proposed implementation programmes include further capacity building workshops, regional conferences, collaborative education or research programs (consortiums), and AUN/SEED-Net Alumni Gathering. AUN/SEED-Net will continue gathering ideas from AUN Member Universities and reflect them in the new structure.

Universities from the Indonesia-Malaysia-Thailand Growth Triangle (IMT-GT) held the IMT-GT UNINET Mobility Program: Virtual Teen-Talk Project+ Series 6 with the theme “How Growth Mindset, Capacity-Building, Networking, and Mobility would formulate global partnerships across the region?”. The event was hosted by the Prince of Songkla University, Thailand, last December 15, 2021 (Wednesday) via Zoom. The event was attended by more than a hundred college and university students from University of Sylah Kuala, Universitas Andalas, Universiti Malaysia Perlis, Universiti Utara Malaysia, Thaksin University, and Prince of Songkla University Thailand.

In a first for Mahidol University, the Mahidol family and local community gathered on the Metaverse for the Healthy Mahidol in the New Normal. The Metaverse exhibit and health promoting activities drew in over 2,000 participants including university administrators, staff, and students representing 44 faculties, institutes/colleges. The event and exhibition was made possible with the financial support of the ThaiHealth.